This may return many results - Use the search tools again being a little more specific. 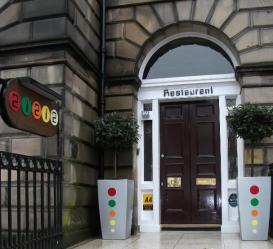 Check Latest Prices and Availability of this hotel in Edinburgh

Michelin-starred chef Paul Kitchings new restaurant 21212, in Edinburgh, opened on Wednesday 20th May 2009.
The restaurant received rave reviews and numerous awards including winning the Best New Restaurant in the UK 2009 at the National Restaurant Awards. In January 2010, only eight months after opening, 21212 received a Michelin Star.

The four beautifully appointed large bedrooms, with dedicated lounge areas, are split over the two upper levels of the house, offering commanding views over the gardens to the rear and stunning views of the city of Edinburgh to the front. On a clear day, bedrooms 1 and 21 also offer views to the Firth of Forth and beyond.

Each bedroom's decor is different in theme and style and facilities include ensuite bathrooms with either a free-standing bath and walk-in shower or a specially designed wet room. Guests also have their own flat screen plasma television, internet connection and extensive storage spaces.

All four bedrooms, which are available seven nights a week, were designed to provide a relaxed, calming and elegant mood for guests.

In addition to the facilities mentioned below, the following are free services
Free Wifi or Broadband is available
This property is at an elevation of approximately 213 feet / 65 metres above sea level


General Location and Nearby

City Centre Location - 0.4 miles from the Centre of Edinburgh

Attractions & places to see nearby

= leap.spare.tricks
A hill within Regent Gardens close to the city centre with paved access and great views over the city

= desire.crown.poem
A Royal Palace, and the Queen's official residence in Edinburgh and with a long history of other monarchs through the ages. The palace is open to the public to tour
0.4m / 0.6km - - 6min

= types.forced.chips
a large monument in memorial to Napoleonic Wars and the Scots who fought - location on Carlton Hill Regents Gardens
0.2m / 0.3km - - 2min

= desire.crown.poem
Located next to the Palace of Holyroodhouse, the medieval abbey is now in ruins with no roof, though the walls are still standing, giving an insight to the historical grandeur of the abbey which is open for tours.
0.4m / 0.6km - - 6min

= flats.opens.clues
A Monument to lord Nelson with Regent Gardens with a time ball at the top and great views over the city and sea
0.2m / 0.3km - - 3min

= filled.punks.bucks
Not one specific place but a collection of streets covering an area known as \"Old town\" running approximately from the castle gates to the Palace gates. A popular tourist destination In ediburgh
0.4m / 0.6km - - 7min

= stiff.cones.makes
An old style playhouse and a a Grade I Listed Building with multi- tiered circle and balcony seating has the largest capacity of seats of any working theatre in the UK at 3059. The venue now shows music concerts, musicales, comedy, and dance
0.2m / 0.3km - - 3min

= villa.venues.twig
A church in the Old Town of Edinburgh, also known as the "High Kirk of Edinburgh" . There are boof guided walking tours, and guided rooftop tours.
0.6m / 1km - - 10min

= obliging.effort.piano
The home ground of Scottish football Premiership club Hibernian with a capacity of just over 20,400
0.7m / 1.1km - - 10min


View more hotels nearby with distances


Frequently Asked Questions.
What is the nearest beach to this Hotel?
The Portobello West Beach is 2.3 miles from this Hotel. We also list other beaches within 5 miles with descriptions

Does this Hotel have free WiFi?
Yes there is Free WFi at this Hotel


Disclaimer - These site listings are provided free of charge as a means to locate Hotel accommodation in England, Scotland and Wales, please contact the site direct to make bookings, verify availability, content and obtain further information on facilities before proceeding
copyright © 2022 * all rights reserved - 51